If you have listened to professional reel to reel master tapes, you certainly acknowledge the superiority of analogue recording. Music on reel-to-reel tape presents a more natural, a more dimensional, deeper and far more realistic sound, with unmatched airy ambience and detail, even when compared to the best LPs or SACD or any digital formats.

A typical open-reel tape is about 50 microns thick (sometimes it is called 'Standard Play'). With a full 10-inch reel of tape (the standard studio recorder size) the play time is a bit over 30 minutes at 15 ips (inches per second) which is the common speed for a professional machine.

Most modern tapes are 'back coated', that means a slightly matt and rough-feeling surface (opposed to a shiny, slippery one). The back coating is to improve the tape winding characteristics. It offers an improved friction between layers and excludes trapped air during fast winding. A proper winding is essential in avoiding edge damage to the tape that is the main cause of drop-outs and poor head-to-tape contact.

The reasons why a tape sounds essentially more natural and alive, compared to LP and high resolution digital, are complex and numerous. Let’s touch upon a few:

Magnetic tape stores the music in a magnetic image

A 'magnetic image' of a sound can be stored on a tape by magnetized iron oxide or chromium dioxide granules. The tiny granules are fixed on a polyester film base (the 'tape'), but the direction and extent of granules' magnetization can be changed by the recording head to record an input signal. The 'magnetic image' is an analogues representation of the 'sound image' of the music recorded.

Analogue tape recorders do not use discrete digital levels

It sounds evident, but we are living in a digital time, and we have almost lost the common sense. Analogue tape systems do not operate with discrete digital levels in which the recorded signal is encoded. Thus, the original signal can be preserved within the dynamic range of the recording system.

Analogue tape does not require any band-limiting filters

As you know, digital audio requires band-limiting filters in order to prevent aliasing distortions. In contrast, an analogue tape does not require any band-limiting filters. While the measured digital noise seems lower than analogue tape hiss, tapes do not show unnatural phenomenon such as jitter. (Jitter is the undesired deviation from true periodicity of an assumed periodic signal in electronics and telecommunications, often in relation to a reference clock source.) Unlike wow and flutter, jitter variations have a far higher frequency and thus are less easy to perceive. However, they are actually more annoying for a music listener.

The tape hiss is not integrated into the music

Analogue tape should produce some inherent noise (like tape hiss), which sounds in parallel with the recorded music, just as the ambiance room noises at a concert. The digital noise, while not separately perceptible, is actually integrated into the music, not appearing as a parallel ambience sound.

Digital formats are always changing, today's digital recordings might be unplayable in the future. Digital format is a cryptogram, if you lose the key... (Can you play back your sound recording recorded by your early Commodore-64?)

How we record music on tape?

We use True Analogue Recording technique for music recording. Music is captured by a single pair of AKG C 414 Limited Edition microphones directly connected to a Nagra IVS reel-to-reel tape recorder. We prefer RMG SM468 tapes (which is the best choice for Nagra). The recorder is operated at 15 ips speed and switched to Nagra Master equalization. The dynamic range is 74 dB.

Why Nagra IVS? First of all, Nagra is portable. Nagra is silent, and Nagra produces a very clear and natural sound. That means Nagra IVS does not add anything to the recording.

How we finalize the master tape?

Because the music was recorded direct to stereo, there is no opportunity for mixing or manipulating it after the recording has been made. Our experiments revealed that ANY manipulation decreases the quality of recorded music. We always use live recording and record entire pieces of music. We do not edit the tapes to create a track from different separate recordings. We do not want to kill music.

At first, we have to clarify the term of 'master tape' as it is although widely used but often misinterpreted. The so-called 'original' master tape is typically a mix-down tape that may already suffer from several re-recordings, especially if a multi-track overdubbing was involved. That means a master tape might be a 2nd to 5th generation tape. 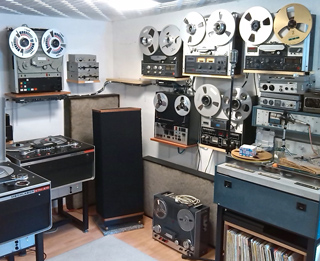 Finally, Studer A807 and Lyrec PTR-1 Frida were found as the most appropriate recorder for our purposes.

We also tested the sound of several available audio tapes and found SM468 the most musical reel to reel tape.

How can you prevent reel-to-reel tape from degrading

You should care your tape with the awareness that you would give to a valuable book or important photograph. In general, handle your tapes with care, keep them clean, and apply your common sense: