Vinyl records will be really dead when nobody wants to listen to them anymore. Thanks to many old and young enthusiasts (including me and perhaps you?) in the world, the situation is not too bad. If you check the dry statistical data of the recording industry, you will notice a huge decline in selling CD and a rise of vinyl records. Even the turntable market is prospering.

We may see a renaissance of vinyl records in our days.

The story of vinyl 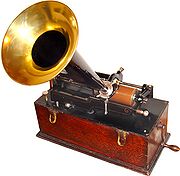 1877, Thomas Edison developed the phonograph that was capable of replaying the recordings made. The recordings were made on tinfoil, and were initially intending to be used as a voice recording medium, typically for office dictation. This initial machine was developed further by Edward Guilliard.

However, Edison had no intention to record music.

The first live concert recording of Handel’s “Israel and Egypt” was made in Crystal Palace by Edison’s London-based agent in 1888.

Phonograph cylinders and also gramophone discs were played on mechanical devices most commonly hand wound with a clockwork motor. The sound was amplified by a cone that was attached to the diaphragm. (See how it works...)

By 1925, the speed of the record became standardized on (nominally) 78 rpm.

In 1958, the first stereo two-channel records were issued by Audio Fidelity in the USA and by Pye in Britain using the Westrex "45/45" single-groove system. While the stylus moves horizontally when reproducing a monophonic disk recording, on stereo records the stylus moves vertically as well as horizontally.

How vinyl records are made?

These videos tell you the essentials of record making in two parts:

Why does Tone-Pearls Records prefer vinyl records to CD?

Thus, vinyl records are rather in harmony with music than digital recordings. Read more about digital music...

"Virgin" and "heavy" vinyl is commonly used for modern audiophile vinyl releases. Many collectors prefer to have 180 g vinyl albums, and they have been reported to have a better sound than normal ones. These albums tend to withstand the deformation better than regular vinyl.

Since most vinyl records are from recycled plastic, impurities can be accumulated in the record, causing a brand new album to have audio artifacts like clicks and pops. Virgin vinyl means that the album is not from recycled plastic, and will theoretically be devoid of these impurities. In practice, this depends on the manufacturer's quality control.